Why Raccoons Are Not Family Pets 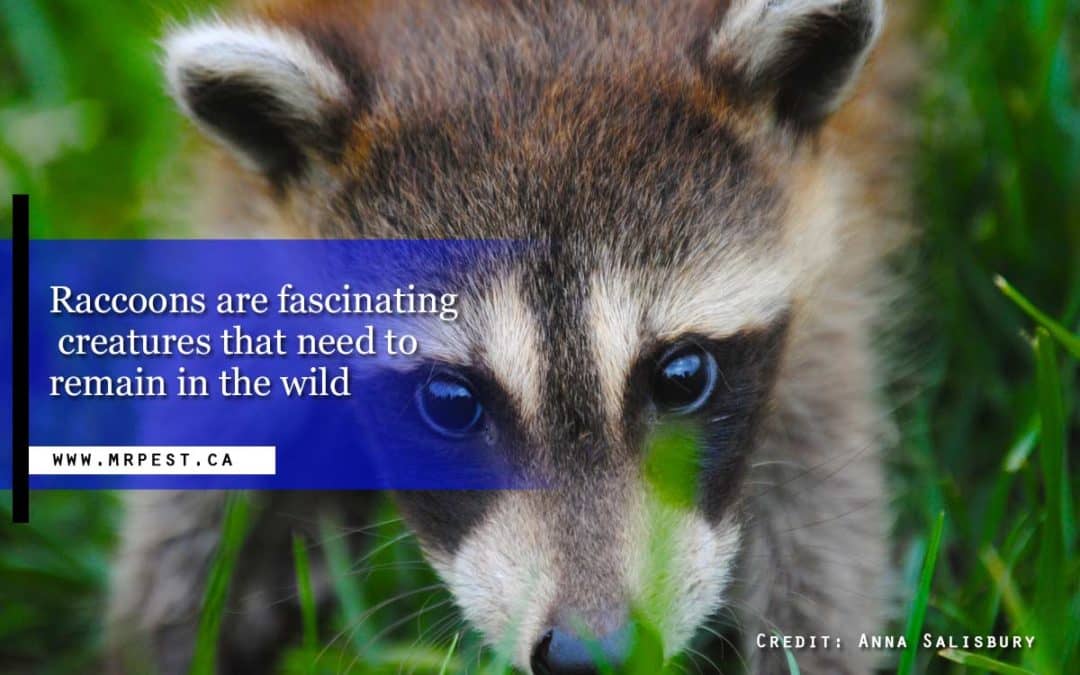 Affectionately called “trash pandas,” raccoons are highly intelligent and curious creatures. In urban areas, their numbers are so plentiful that we’ve even started referring to them as raccoon nation. They are cute and playful, and some people might consider keeping them as pets, but raccoons can also be incredibly messy and destructive to homes and property. They can be incredibly affectionate when young, but when they grow up, their behaviour becomes unpredictable, and are prone to bite when scared or provoked.

The bottom line is that raccoons are wild animals and thrive best when left alone in the wild.

Raccoons are known for their black fur “masks” that cover their eyes and thick grayish brown fur covering the rest of their body. They have a pointy snout, black nose and a tail with 5 to 7 rings. Adults weigh an average of 14-23 lbs, can grow to over two feet long, and can run at speeds up to 25 kilometres per hour.

Raccoons are incredibly dexterous animals. Their fore-paws can work like fingers, easily grasping and manipulating food, catching fish, opening trash bins, door knobs, and latches, and can easily pry open many types of containers. Raccoons are most active in spring, summer and fall, and rest in their dens for many weeks during the winter. They are nocturnal animals, which means they like to hunt for food at night, though they can be spotted during the day. If you see one during the day stumbling or walking in circles, it may be injured or in distress, and you should call your local Ontario SPCA or wildlife rescue. 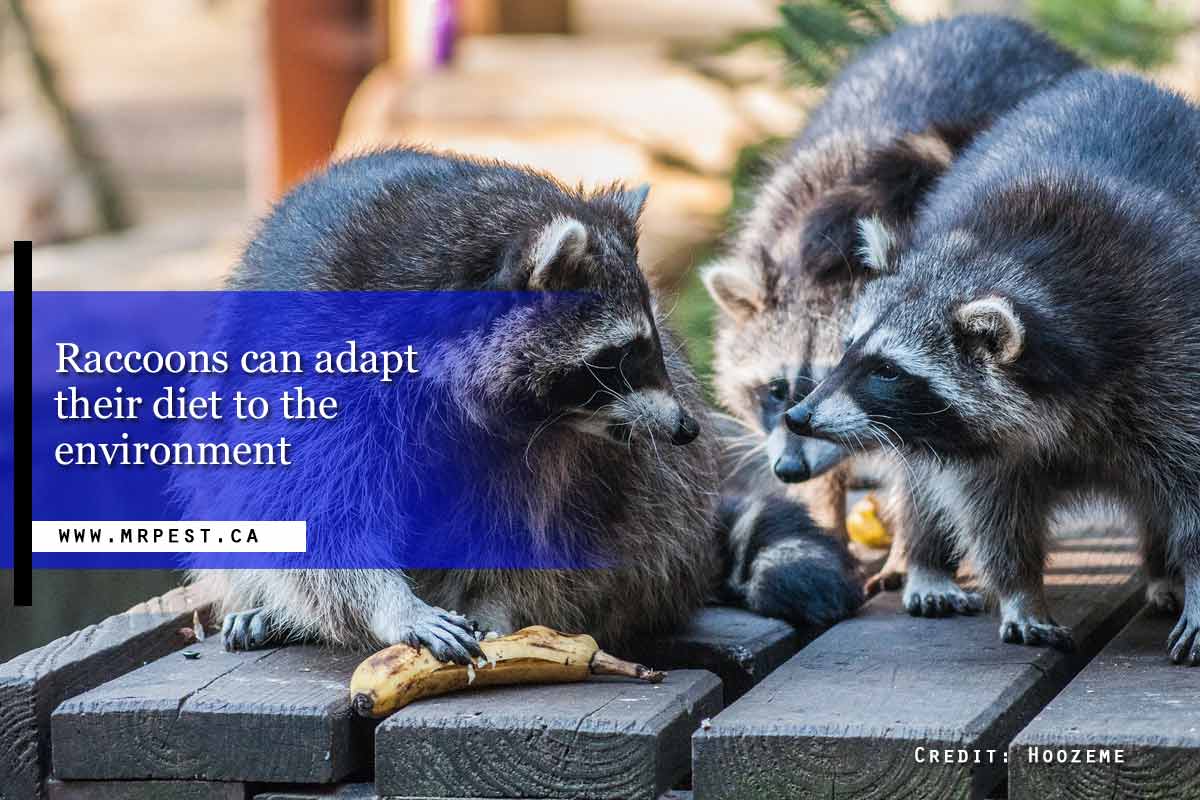 Raccoons are native to North American and can be found in almost every region, including parts of Mexico, and even in northern areas of South America. Raccoons originated in warm tropical climates along riverbanks, where they could be close to their food source and hide from predators. Over time, their territory has spread north across the continent. They are expert climbers and like to hide and nest in any available space. In rural areas, their favourite place to nest is in hollow trees or abandoned burrows. In cities, they make their homes in attics, crawl spaces, garages, sewers, hollow trees and chimneys.

The first urban raccoon sighting was in Cincinnati, Ohio in the 1920s and since that time the urban population in cities across North America and Canada has exploded.

Raccoons are omnivores, which means they eat both vegetation and meat, and in fact, will eat almost anything they find. Favourite foods include fruit, plants, nuts, berries, insects, frogs, fish and eggs. In cities, raccoons often forage for food in human garbage.

Raccoons are highly intelligent and can communicate with each other using a variety of hisses, clicks and calls. They live an average of 2 to 3 years in the wild but can live up to 20 years in captivity. 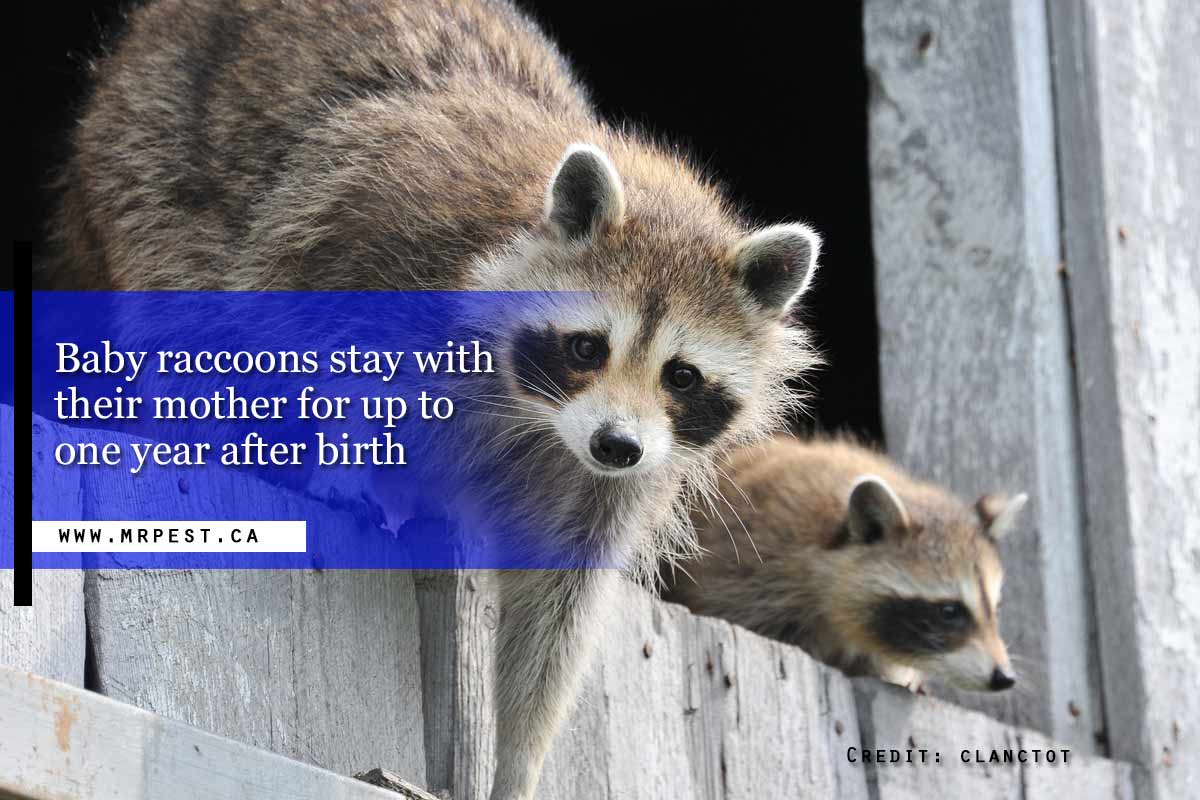 Raccoons breed in late winter, with female raccoons usually give birth to one to six babies (or kits) in the spring. Mothers are highly protective of their young and will fiercely watch over their babies for about a year. Adult raccoons live in groups of about 4 or 5 for better protection against predators.

Raccoons sound like amazing animals, why not keep one as a pet?

First, it is legal?

In a word, no. The Ministry of Natural Resources and Forestry in Ontario says it is illegal to keep a native wild animal as a pet in the province of Ontario. This includes raccoons, squirrels, and foxes, for example. The fine for keeping any native wildlife is $240.

It is also illegal to keep wild animals in your home or provide care for a wild animal for more than 24 hours. This is because if injured, they require professional attention and should be treated by a wildlife rescue and rehabilitation organization. Only those with proper authorization, such as wildlife custodians providing care or rehabilitation to sick, injured, or orphaned wildlife with the goal of releasing the animal back to the wild, are allowed to care for native wild animals. 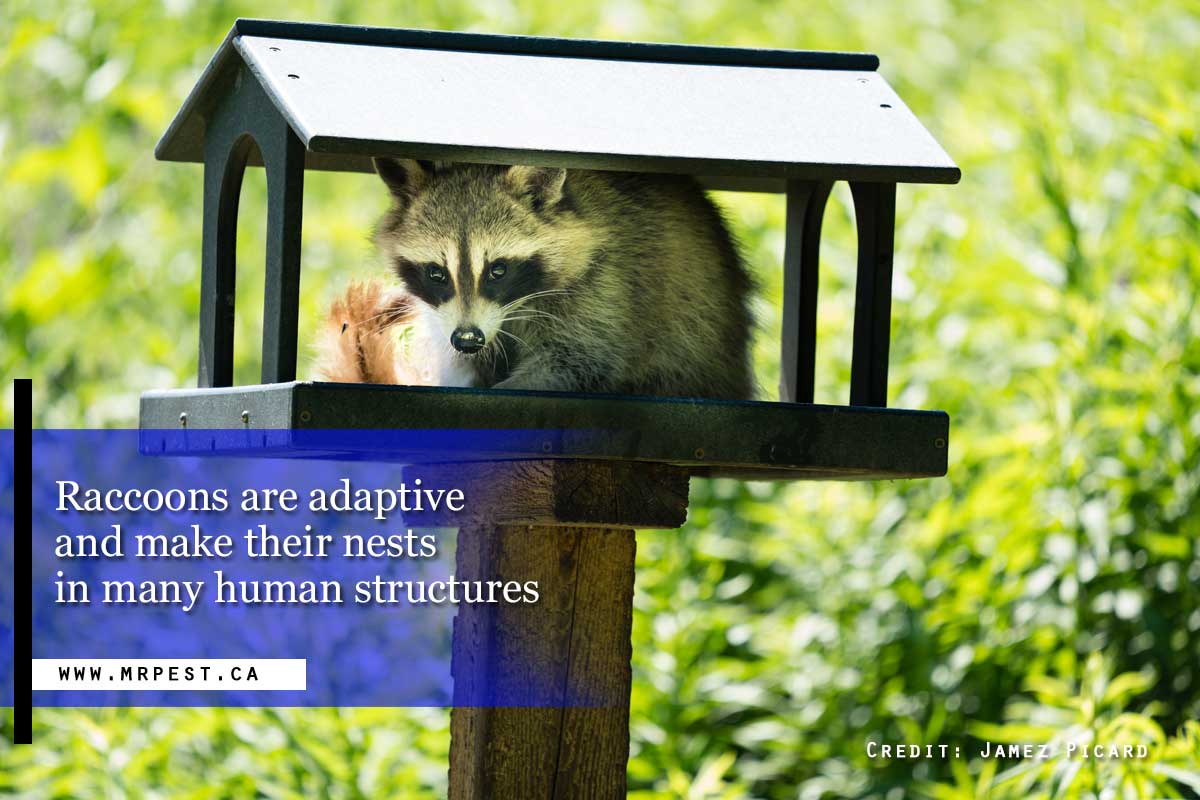 Raccoons are wild animals. It is unethical to keep a healthy wild animal and make it live its life in confinement away from its natural environment.

They Can Spread Serious Illnesses

Raccoons can carry and spread rabies without showing any symptoms of the disease. Rabies is a very grave disease that is easily spread and can be fatal if not treated quickly. There have been recent rabies outbreaks in Southern Ontario. By taking wild animals into your home, you are making a huge risk and putting yourself and your family in danger. 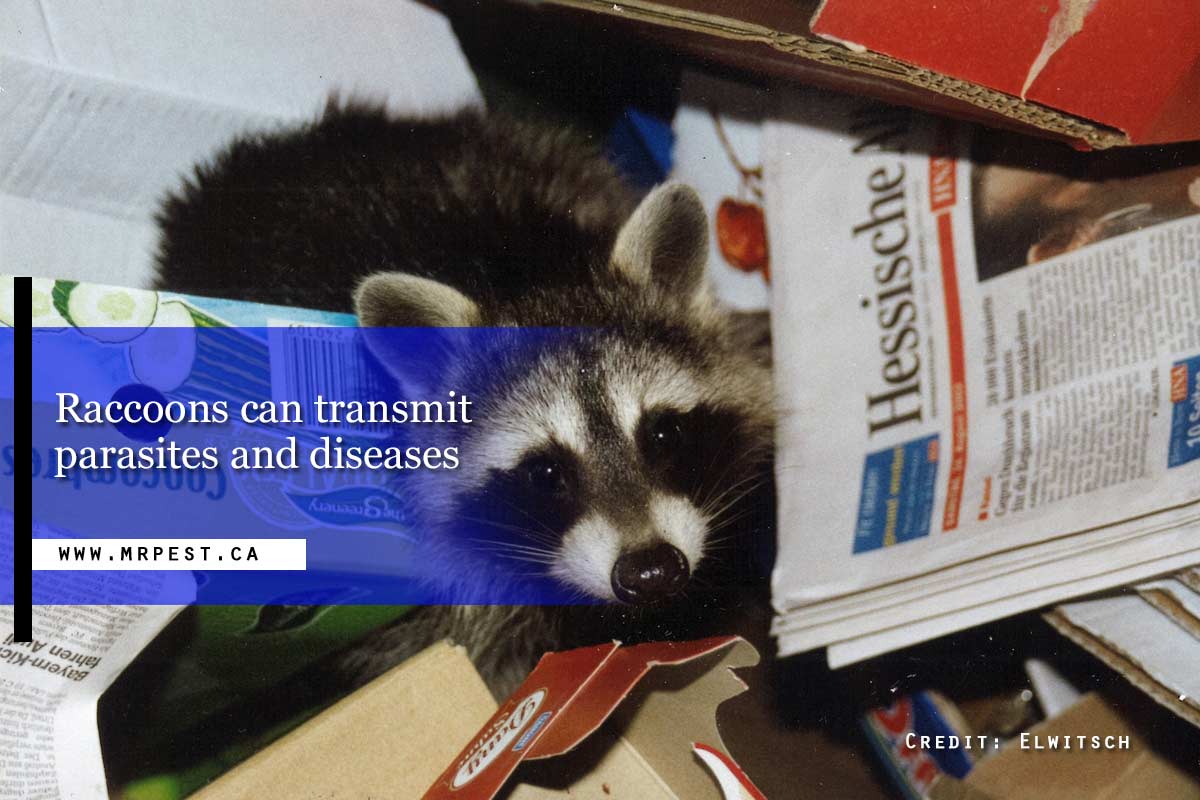 Raccoons can also host an intestinal roundworm that is communicable to humans through infected soil, water, or anything contaminated by their feces. If ingested or inhaled, the roundworm can infect organs, muscles, and move into the central nervous system where it can be fatal.

Other Illnesses Spread by Raccoons:

Caring for a Raccoon

Raccoons are intelligent and social creatures but do not underestimate the challenge of caring for this wild animal. Most veterinarians won’t take on raccoons as a patient, so if your raccoon gets sick, it will be challenging and expensive to find someone to treat it. If you can find someone to provide care, it is also essential that they have a vaccination plan in place.

Raccoons are most active at night and are busy, curious creatures, which can be at odds with human schedules. Upon reaching adulthood, raccoons can become very aggressive and are known to bite. If they feel threatened or anxious, they will attack children, pets, and family members.

Raccoons are bright, curious, and dexterous animals. Having one in your home means not only childproofing, but raccoon proofing — keeping them away from any hazardous chemicals, breakable objects (even on high shelves), refrigerators, and trash. Despite being dexterous and known for ‘washing’ their food before consuming it, those fingers can also get into everything and anything and make a terrible mess. They are also difficult to housetrain. Be willing to sacrifice your bedding, pillows, and couch cushions to their busy, curious paws. 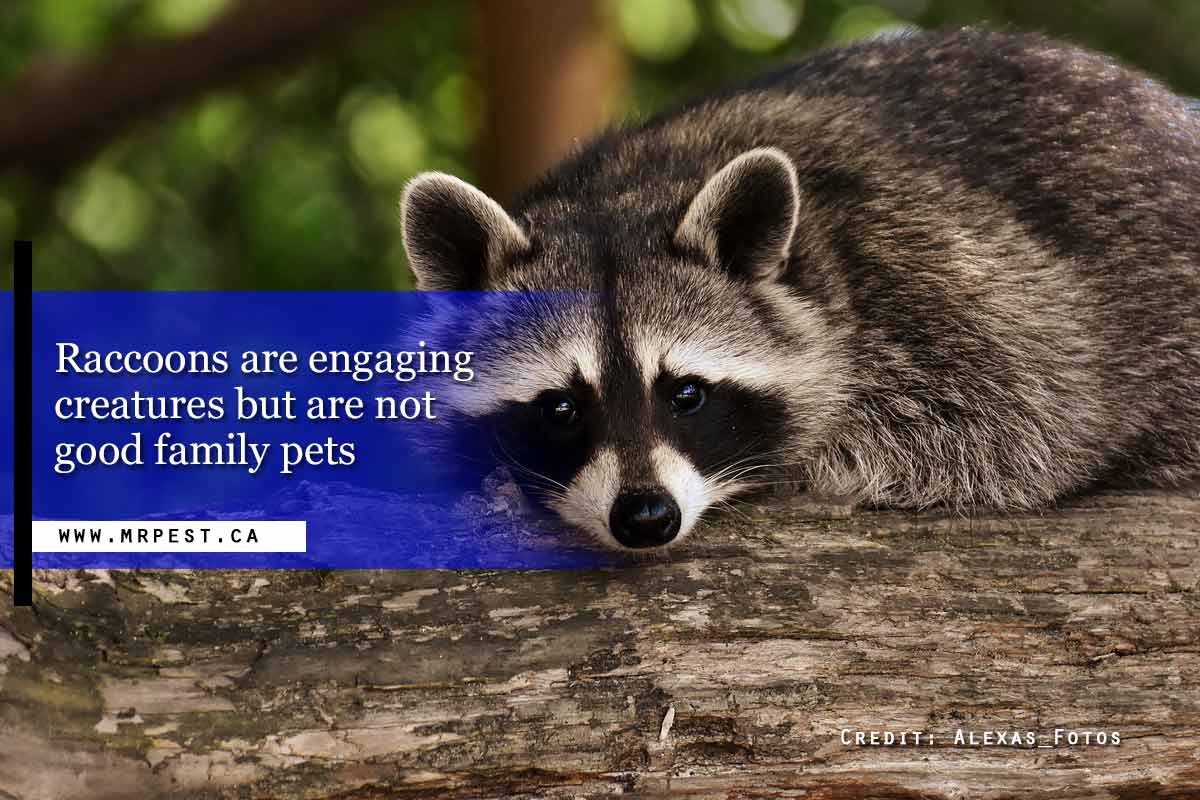 Raccoons are wild animals that need to be left alone in their environment. If you have found a raccoon and need help getting it back into the wild, contact our trained specialists at Mr. Pest Control at (705) 739-7378 (Barrie) or (705) 326-3377 (Orillia) for a free estimate. We are available 24 hours a day, seven days a week. We’ll do the job safely and humanely and get wild animals back into the wild.